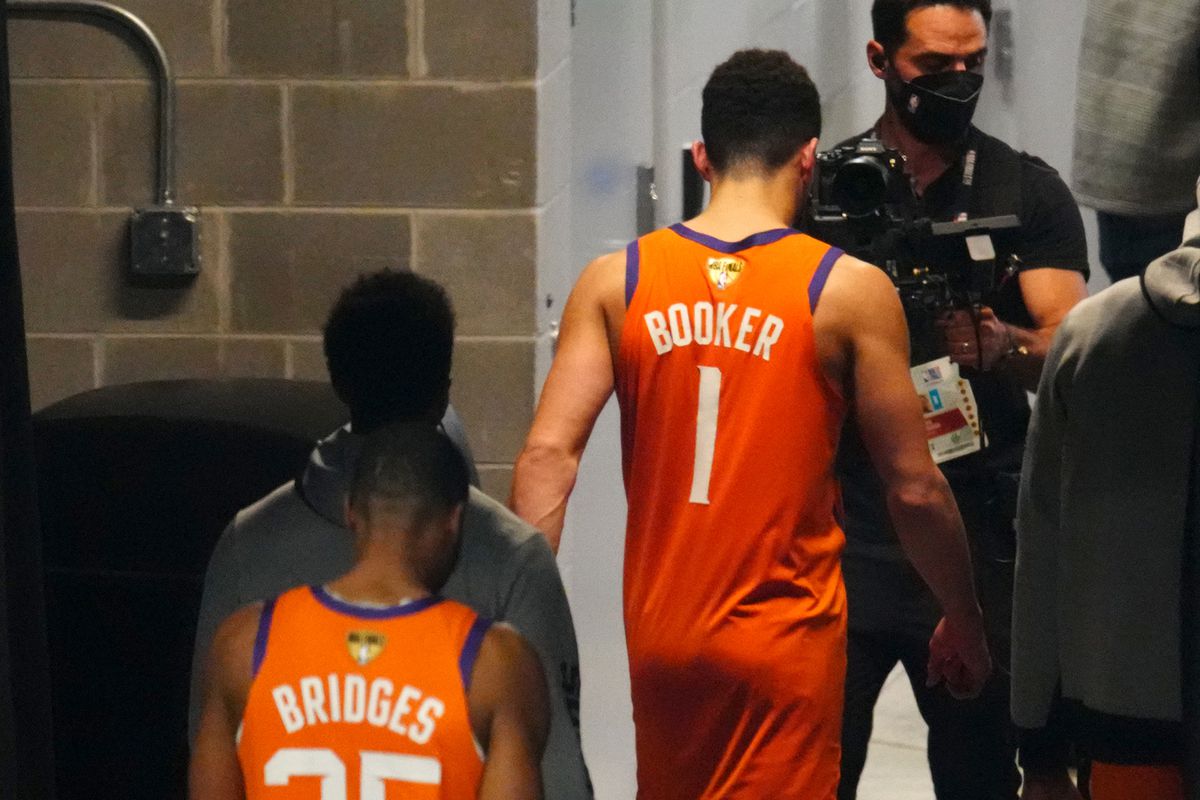 The Phoenix Suns have become a complex team filled with holes and mysteries since this season began, or when they lost to the Mavericks in the second round of the postseason.

The Deandre Ayton drama fueled a heart-stopping end to the postseason, then we had the Kevin Durant saga and if the Suns were willing to move on from Cam Johnson (even Mikal Bridges) and other pieces. Let’s not even get into the Jae Crowder mess that failed to give Cam Johnson a new contract.

So much happened in the offseason that has translated into this already disappointing season that we have to talk about, why? Because the downfall of the Suns has been foreseen and unfolding right before our very eyes, but let’s hear my take on the Suns before we jump to conclusions.

Injuries have become the murder weapon against this organization

No Cam Johnson, tore his knee, Cam Payne has been missing games, with a sore foot, Landry Shamet missed a couple of games, with a sore achilles heel, and the worst blow to this team came when the news about Devin Booker came out. Sure you had the hamstring issues, which got solved, but now he is suffering from groin injuries. The latest has sidelined him for a month and has three weeks remaining. Plus, Chris Paul missed a couple of weeks of action due to his latest injuries.

As you all can see, these injuries have piled up and translated into this Play-In type season for the Suns. Then you add Jae Crowder, who doesn’t want to play basketball unless it is for a new team (which was mutually agreed upon by both sides), to the list of players not playing and/or injured.

There has been a lack of consistency in the roster and that in turn has affected the Suns’ play individually and collectively as a group, and understandably so with any other franchise.

The Suns were fine without Chris Paul, who has been non-existent in many games this season (when talking in the sense of him shooting the ball) when they could rely upon Cam Payne – until he got injured. Now he is back and trying to fit into this team once more.

Everything was temporary and now the Suns have fallen from first to out of the Play-In, which is incomprehensible.

So having your “star” players out and your bench players getting starting roles, you are bound to have inconsistencies and many mistakes. There aren’t always enough days to practice before the game comes around, especially in the face of injuries or players from the third line trying to play with the starting line of players.

This team has relied upon Devin Booker FOR TOO LONG

Since he got drafted this team has relied upon him, but that isn’t necessarily bad when we all know him to be the franchise player. However, the reason why they depended on him so much in the beginning, and leading up to the NBA Bubble, is due to the fact that they didn’t have other talented players helping him and being the Robin to Batman (Booker).

But now when a team becomes so dependent on a player, they start to need him for every game and every big moment. The Suns have shown, have proven, to us that without Devin Booker they are incapable of scoring and playing beyond well in big moments. Take the games against the Trail Blazers as an example.

No one else knows how to score the way Booker scores each game and no one is stepping up in that role immediately, or at least in the time, they have been given since they knew about this Booker injury. That is a byproduct of what happens when a team is dependent upon one player, coaches and players guilty of this as well.

Because they have relied upon Booker for too long, Phoenix has no true second scorer that can step up when Booker is playing well or isn’t playing period. Chris Paul in this stage of his career is more of a traditional, pass-first point guard – mainly due to his age and the accepted role within this franchise.

Mikal Bridges, Cam Johnson, Deandre Ayton, and company are fine scorers too; however, they are not secondary scorers behind Booker. Ayton is underperforming on that as he is very inconsistent with many things in his game per each matchup they have with any team; Johnson has not assumed that role yet as the experiment year (without Crowder) has been very shaky due to injuries. Lastly, Mikal Bridges does not score the ball primarily. That isn’t his big strength, in fact, his big strength is using his body and playing exceptional defense.

Can the bench players do anything to help?

I love Josh Okogie, Daune Washington Jr., Jock Landale, and the rest of them; however, they aren’t the next shooter to fill in and be a big success if Booker isn’t feeling it that night or simply can’t play that night. Okogie is good, but he is used more for hustle and defense. Landale is a big man that comes in at stretches where Ayton needs a break, same with Biyombo. Washignton Jr. is starting to find his groove but he isn’t going to give you that impact that Booker gives you, to put it in simple terms and not overcomplicate it.

Simply put this way, a team can’t rely upon an entire bench to fill the role of your franchise player or most impactful player. Period, end of discussion. Can they help you in critical times, down the stretch? Yes, but they aren’t meant to be in the role of that secondary shooter to be the Robin to Batman Booker; and nor should they be.

The Suns got a good bench, but a good bench only goes so far when the starting lineup can’t get shots to fall or be impactful and turn the tide of the game.

The Suns’ have a broken mentality right now

Teams like the Warriors have figured out how to win without Stephen Curry, they have strengthened themselves, but a team like the Suns has figured out how to lose more games than we want to possibly think about. Phoenix has so far lost 18 games, the same amount of games they lost last season in their historic run.

The game against the Knicks was a brutal game to watch as it showed no effort, no heart, and immediate quit from a team that should have smoked the then 9-game-losing-streak Knicks. However, that wasn’t the case. Phoenix got humiliated, embarrassed, and quite frankly should have been ashamed of themselves.

Mini blowups between Suns’ players (like Ayton and Bridges/Monty Williams during the Wizards game) have been seen and it should come to us as a shock that while teams have thrived and built a stronger bond together; the Suns cannot do that and have been struggling to connect on chemistry in even the simplest of ways. Honestly, that is something that perplexes me each day and each game I watch of this young group of players.

That is the third and final thing that has caused many to believe that this is the downfall of the Phoenix Suns, but is it really the downfall? Here’s my take on it.

Here’s my take on everything

The Phoenix Suns need to make a trade for a player like Kyle Kuzma, and I have expressed why Phoenix should go out and get Kuzma, but I also believe that doesn’t solve all the issues. I strongly believe that a lot of the issues the Suns’ are facing right now will be cured when injuries are at a minimum and the group can start to gel again.

Once Devin Booker, Cam Johnson, and that newly acquired player come to the Suns, Phoenix will be an unstoppable team again. Up until that new goal in time, the Suns have been (and will be) on a downfall. I believe the postseason series against the Mavericks started it, but the Suns now have a chance to end that and move past it when they get the new guy and can start to gel again.

I have not been thrilled with this team all season, however, I still have tons of faith that we can turn this around. Honestly, this team has an amazing shot of going to the postseason without needing the Play-In. It should also be documented that this team is experiencing minor setbacks, these injuries aren’t major to the point of no return.

In fact, these injuries have caused a setback that can be healed within a matter of 20 games. Ponder on that a bit before you go all doom-and-gloom on the Suns. There are a lot of negatives occurring currently, but this team has the chance to rectify that and turn themselves around.

These issues aren’t permanent, they are temporary. Understand that. Get Kuzma, get everyone back who is 80% healthy, and start winning games again and forming that unbreakable chemistry. This issue boils down to injuries, dependency, and many other factors that are turning into a dangerous snowball effect.

The Suns have fallen but will soon rise again. Phoenix will be soaring again and I have no doubts in my mind that we will be on win streaks like you can’t imagine and we will be back in the postseason. The All-Star Break and after that break will be very telling for this team, but that is when we are new and that is when we are dominant once more.

The West is competitive and mentally/physically taxing, but the Suns are the better team and will prove that. Trust me, get the player, reform the squad, and watch this team go to town on every team that has beaten them or humiliated them.

In the end, that is my take, and do not forget about it.