The action broke loose on Day 2 of The NBA’s Return! 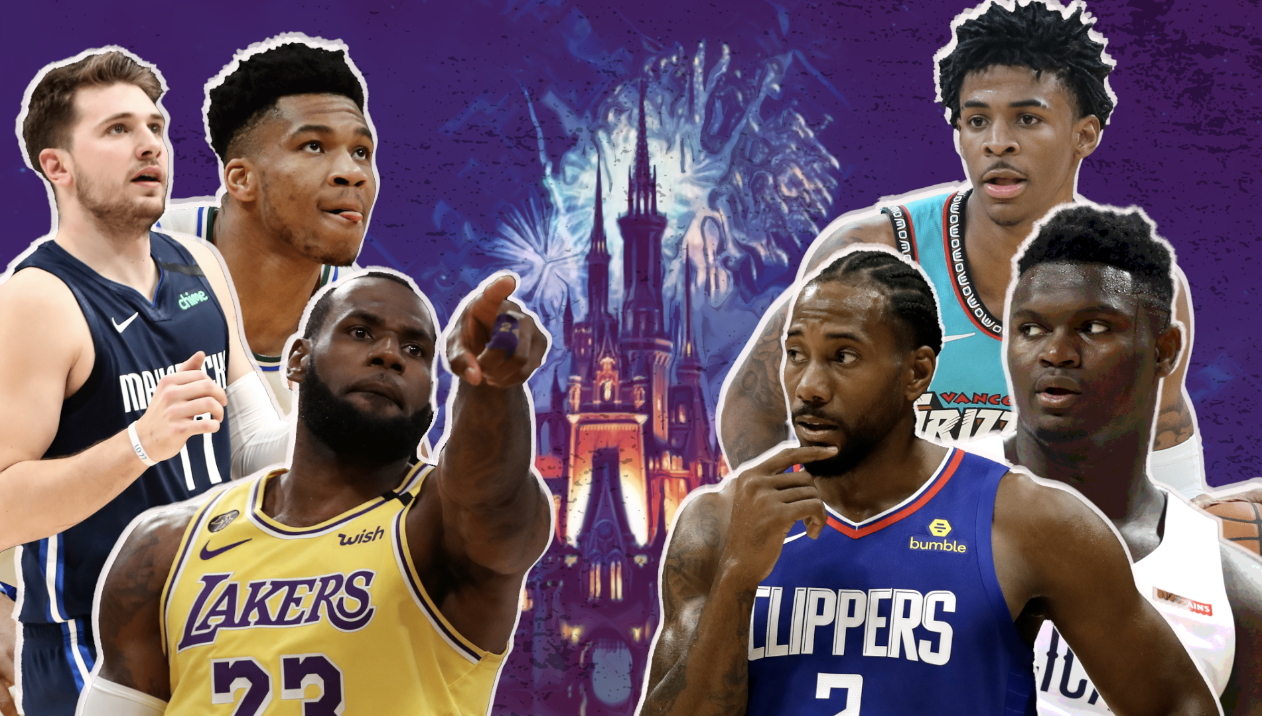 The action broke loose on Day 2 of The NBA’s Return!

The action broke loose on Day 2 of The NBA’s Return! So many things happened on day two of the NBA’s return after missing several months. There were 6 games that aired yesterday, but only three stuck out.

First of all, so much has happened yesterday. The Suns are looking better (I know shocker), Rockets-Mavs put on a show for us, and Portland’s main three balls out! Plus, some other crazy things happen too.

First up…. is Kemba going to be up to playing the rest of the season?

Even though, as strange as it might sound, is Kemba Walker going to be able to finish the season with the Celtics? He has been nursing a knee injury and has been getting limited minutes. It was reporting in the 19 minutes he played in, his knee was feeling normal. Meaning, his knee was adjusting to playing ball again and that it felt comfortable.

Walker did show us, despite the lingering knee injury, he can ball. He scored 16 points on 5-9 shooting and dishing out two assists. This is positive news for the Celtics because they are craving a chance for the title, a chance in the playoffs. With their main point guard and veteran leader, that’ll add more support to the group.

Even though they lost to the Bucks yesterday, he showed great effort in those 19 minutes. What is to be of him next game he plays?

When did Jayson Tatum’s shot get broken?

First game back? Haven’t played in a while? Not used to playing with your shot again? Team not supporting him? What ever it is, it doesn’t matter. Jayson Tatum was ugly in playing yesterday’s game against the Bucks, it wasn’t even average. It was disgusting.

Tatum had scored 5 points on 2 for 18 shooting, rebounded 8 shots, and dished out the rock about 3 times all in 32 minutes. This is alarming, the Celtics best (I mean BEST) forward they have on their team. Yes, they do have Gordon Hayward. Sadly, everyone is looking for the younger player to be their top forward.

I believe this is alarming because Jayson Tatum never had a bad game in forever, I get the fact that he stepped up on defense (kinda). Still, he is a forward and forwards are suppose to score get to the hoop and just dominant. Instead he flopped.

If he continues to have poor shooting percentages and cruddy outings, I believe Hayward will get more of his minutes. Hayward will shine more, and Tatum will be demoted significantly. But that is if worse comes to reality.

Even though the Celtics were less than 10 points away from the Bucks, it didn’t matter. Giannis was coming for everyone, that court was his. He is preparing for the playoffs, each game, and potentially the NBA Finals. The way this player is playing there is no stopping him, he could win the NBA MVP over Lakers’ LeBron James.

What were his stats? Giannis scored 36 points, on 14 for 20 shooting, 15 rebounds, 7 assists, and 1 steal in 32 minutes! That is beast-mode right there, he almost had a triple-double. No matter who says what about Giannis, Giannis was ready for the regular season after the scrimmage games.

It didn’t appear to me, nor anyone (especially looking at the stat-sheet), that he had rust on his shot or conditioning. This could be the number one player to contest the Laker’s hopes and dreams of winning the NBA Finals.

If Giannis can keep putting up 20-30 plus points a game, I believe he will dominant the NBA Bubble. Even though it will be the Rockets on Sunday, the Rockets do play small-ball a lot of the time (except when Robert Covington is on the court) Giannis will surely dominate. I project him getting 25 points, 12 rebounds, and 5 assists. For fun, one steal.

We could be seeing a scary side of Giannis that nobody wanted to mess with, especially with everyone getting back into the groove of things.

Now to the bigger news: what could I tell from these three games?

You could be thinking to yourself right about now that those other headlines that were mentioned to you were the big news, oh no these three games are. Even though they don’t seem like it, they mean a great deal to the NBA’s race to the playoffs.

To kick things off, let’s start with the Suns!

The Phoenix Suns and are back and could be better than ever. DeAndre Ayton and Devin Booker shined in yesterday’s matchup versus the Wizards. Booker and Ayton combined for 51 points, but what set each player apart would be the fact that Booker scored the majority of points (27) while Ayton would be achieving a double-double.

What’s the exciting news for the PHX Suns?

This is exciting news for the Suns because this is the path to success, they would need to win almost all their games (like 7 out of 8) to be a contender/in the playoffs. Even though the Wizards did not have John Wall nor Bradley Beal, you can’t take away from what the Suns did.

What the Suns did was show strength, teamwork, ability to play defense correctly, score efficiently, and get Booker and Ayton the ball. This is the first game in a while that we have seen the Suns win a game that carried so much dominance, that actually showed the teamwork of Ayton and Booker.

Why this game is so crucial for the Suns is because this is building team chemistry for the Mav’s game and beyond. I believe they are forming a good winning team that can do some real damage once they find all their right pieces. They have Booker, Ayton, and Rubio. That is a pretty solid three-some.

This game for Booker felt like he never missed a game, it felt like it didn’t take too long for him to get comfortable again. Just look at his shot, it’s back to mid-season form and his stats. The stats haven’t dipped yet.

The most crucial, and important, stat out of them all would be free-throw shooting. They were 30 for 32 when shooting free throws, which played a huge part in their success. The Suns were able to draw fouls, go to the line, and sink their shots. That’s smart and efficient basketball right there.

If they keep feeding it to DeAndre Ayton and Devin Booker, keep doing their rotations, offense, and defense right. I believe this team will be a serious contender for the playoffs in the next year or so, who knows maybe this season if they make it past some harsh teams.

The Portland Trail Blazers kicked some serious butt in a close game against the Grizzlies. This OT thriller was amazing. Jaren Jackson, Ja Morant, and Brandon Clarke was no much for Portland’s main three. Damian Lillard, Carmelo Anthony, and C.J. McCollum.

Lillard, McCollum, and Anthony scored 81 points combined. All three men were shooting the ball, passing the ball, and rebounding the ball amazingly. Things couldn’t have gone better for them, all three men looked to be ready because they showed no rust at all.

Carmelo was getting catch in shoot three’s, Damian was finally options in the lane, and McCollum was creating his own shot in the lane. All three players were amazing passing around the ball, the whole team was. Passing the ball was on their side, anyone on that team was creating their own pass to make it work for their teammate.

The Grizzlies were unable to defend against this three-some, this trio could be the next big thing in the NBA Bubble if they keep it up like they did yesterday. They had the hot hand all night, and they used it to their advantage.

In the next few seasons or even next season, the Blazers might be the hottest team on the court and on the headlines. I believe these three players, and the whole team, will put the league on notice.

Lastly, probably the greatest game yet!

In the NBA Bubble, we have been seeing tons of basketball games, some good some bad. In the end, The Rockets-Mavs game blew everyone away. The Rocket’s won in an Over Time special, Westbrook and Harden combined for 80 points while Burke and Porzingis combined for 70 points total.

Luka Doncic did get a triple-double, maintaining 20+ points while getting all the assists and rebounds. Tim Hardaway Jr even had his fair share of scoring with 24 points, but no matter how many points they scored they couldn’t keep the Rocket’s away. Rockets’ Robert Covington put in the game-sending OT shot that would eventually win them the game.

Covington contributed 13 points, including a clutch shot that saved the game for the Rockets. Everyone, besides P.J. Tucker, scored 10+ points. Even though the stats didn’t go in favor of Tucker, he prevailed through his defensive work and good offense. Everyone was involved in the Rocket’s, nobody was left behind.

Regardless of who did what, or who did more. The fact of the matter is this: the OT thriller was amazing, Harden was going nuts when shooting the ball. That was tons of fun just seeing that none of the Mav’s nor the Rocket’s players being too effected by not training/playing basketball for several months (besides the scrimmages).

The Rocket’s future holds bright as they outlasted their opponents big time, and came up huge. This could be a sign for the future, the dual of Westbrook and Harden can’t be matched. Westbrook is the assist giving, shot taker (when needed), and Harden is the player that takes all the shots and pretty much makes them. That is a really solid dual, besides LeBron and A.D.

What did you guys think of yesterday’s games? Day two of the NBA, was it a success or was it average? Who do you think should be on the must-watch list? Sound off in the comments, we would love to hear from you!

Thank you for reading today’s article called, “The action broke loose on Day 2 of The NBA’s Return!”

Visit our Mercari store to see them of the hottest, trendiest, retro, vintage items out there today! You can’t miss this, click here: https://www.mercari.com/u/892211489/

If you enjoyed this article called, “The action broke loose on Day 2 of The NBA’s Return!” then look at our recommend posts because it is as good (or even better) as this post!

NBA’s First Day Back is…
WHAT IS GOING ON!?!