Where should Billy Donovan go to? 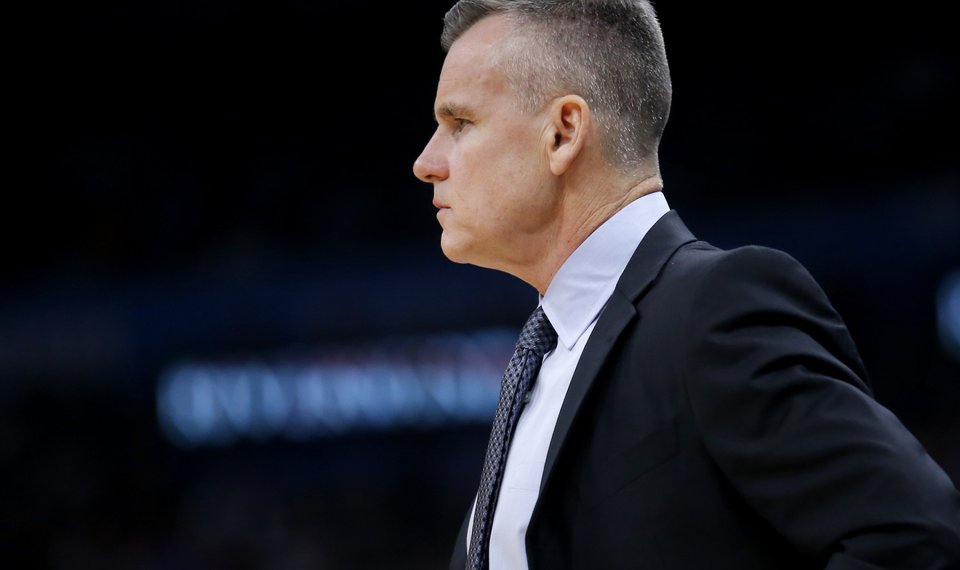 Where should Billy Donovan go to?

Where should Billy Donovan go to? Questions have been looming the sports world as Billy Donovan and OKC split, so what is going to happen? There are several options that could happen: he could get a job with the Bulls, Pelicans, 76ers, and potentially the Rockets.

So, today I will talking about who would be the best fit for Billy Donovan’s scheme! I will be breaking down of every team that would and would not be a good fit for him.

First off, what about the Bulls?

To me, the Bulls should be something. They have the talent, they have the players offensively, and defensively. They have Zach LaVine, which can shoot any shot on the court, Coby White who has been performing great after coming off his rookie season, and Markkenean who has been their dominant big man.

The last time the Bulls were in the playoffs was head coach Fred Holiberg, this was back in the 2016-2017 NBA season. They didn’t make it too far as they lost in the first round by the Celtics. That was the only time the Bulls have reached the playoffs with Holiberg, and that has been in three and a half seasons.

Now, they are just “a team.” Legit, for the past two seasons they have been above 11th seeding. So, here’s the question.

Would Billy Donovan be a good head coach for the Bulls?

That’s a weird matchup for Donovan, could he do it? Yes, yes he could. Sadly, NBA franchises aren’t patience enough for a rebuild. For a new scheme to implement over the course of a few seasons, the players are experienced and ready and so is the coach. Sadly, this would be a process. I would suspect 2-3 years.

Here’s the thing, the team has gone whacky. The team has no direction, they lost directly shortly after the 2015 season. I think he could make those players into stars, but fundamentally his scheme and offense wouldn’t fit with what the Bulls have been running for years.

The Bulls like speeding the game up a little bit, taking those deep shots, getting it down court and waiting a few seconds before firing, and things like that. To me, that team is inconsistent on passing. They have great passers, but they are not utilized properly.

Secondly…. the Pelicans! Would they work for Donovan?

The Pelicans shouldn’t even be a consideration for this man, the Pelicans have lost it. Alvin Gentry tried something with the Pelicans, he had somewhat of a good roster, they were in the playoffs (occasionally), the team just fell.

The Pelican’s right now is at a disadvantage, they really are. You have Lonzo Ball, Brandon Ingram, Josh Hart, Zion Williamson, and Jrue Holiday. Like what is wrong with this team? Besides Ingram, (potentially) Zion, and Holiday. THIS TEAM HAS A BUNCH OF NOBODIES! THIS IS THE SADDEST PELICAN’S TEAM IN A WHILE!

Zion will be out of the league in a few years due to knee issues, because the man has already shown knee issues this season. Already had a knee surgery, and his dunking skills will keep decreasing the power in his knees. To me, if you want a better team get rid of the bench players. Lonzo isn’t going to win you a championship, LaVar can’t make him win a championship no matter how hard he tries.

This is a dysfunctional, chaotic, no-direction team. I feel sorry for Brandon Ingram, happy he is getting recognition. He won the MIP Award, and was playing beast. This is a player to build around a team with, no Zion.

Personally, and just looking at the Pelicans in the past three years, this isn’t a job for Donovan. This job would cause more chaos, more anger and frustration, and this would waste the time of the Pelicans and the time of Billy Donovan.

This team is too far gone for Donovan to salvage this team. If this team was on track, wasn’t dysfunctional, and were looking like a decent team that needed scheme changes. I would say this would be a perfect time, sadly that isn’t the case.

Can the 76ers be a fitting team for Billy Donovan?

Actually, we might have found a match for Donovan. The 76ers are a great team under poor coaching, the team has Joel Embiid and Ben Simmons. Also, count in Al Horford and Tobias Harris.

Brett Brown was interesting, he spent 7 years with the team but did nothing for them. They were in the playoffs for the past three years, but haven’t made anything of it. They were swept in the first round this year, but in the past two years in the Conference Semi-Finals they lost.

This could be one of the best spots for him to land, this team is in great shape just bad coaching. I think he can salvage this team and take them higher in the NBA Playoffs, to me, this can be bigger than anything the 76ers have ever done in the past seven years.

This is the coach the 76ers MUST HAVE to have a better, greater shot at making the playoffs. Plus, can make the players better and things won’t be a mess within.

The best fit out of them all???

Is this the best fit out of them all? To me, yes, I really do believe this. The Houston Rockets and Mike D’Antonio could be splitting ways as his contract is expiring. If not already. To me, let D’Antonio go. Let’s sign Donovan, if the Houston Rockets hire him drastic impacts will be happening.

The Rockets need to get out of this eight-second offensive scheme, this “get the ball to Harden” scheme, this “let’s play phony defense” scheme, and let’s have a real head coach get into the Rockets.

The Rockets need this push, this energy booster that’ll make the coaching and playing side better. I think that James Harden and Russell Westbrook can do much more together if under the head coaching of Billy Donovan.

This team needs to learn how to share, seriously. They just give the ball to Harden because that is how they were programmed to be, Harden. Harden can just dribble and shoot. Ask him to do anything else and he breaks under pressure. Get Westbrook involved, he can shoot, pass, dribble, rebound, and play quality defense.

If they sign Donovan then they would have better chances in the playoffs, players will be playing better together, real talents will becoming out of this, and so much more. This can’t be the “shoot under eight-seconds” rule, they need to spread out the court, look for open players, pressure your defenders, and find the open shot. Plus, play lock down defense in the paint, around the perimeter, and locking down and contesting the three-point shot.

It has to be the 76ers or the Rockets, I think those two teams make the best fit for him. He can be most effective for both teams, create better things out of them, and it would the best for both sides.

So, in short, those are the two teams that would work best with Billy Donovan. What do you think of my assessments for Donovan? What do you guys think of this? Let us know what you think, by sounding off in the comments!

Sonia Raman hired as an assistant coach for the Grizzlies!
Danuel House has been KICKED OUT of the NBA Bubble!