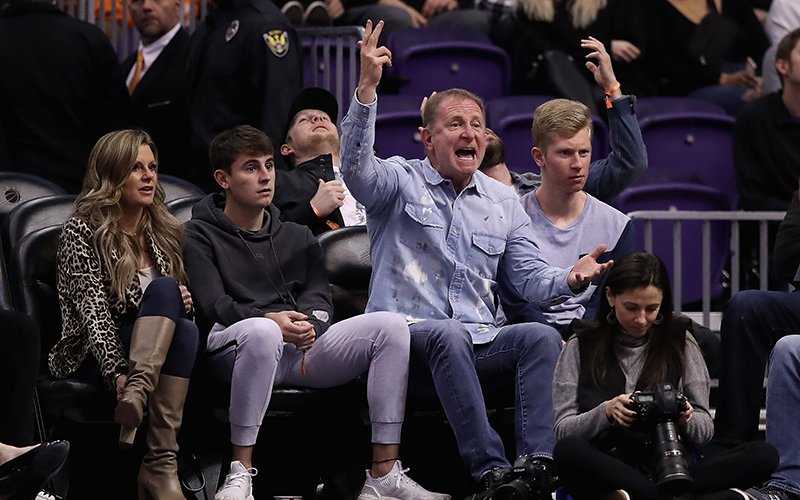 The ESPN article came out Thursday morning at nine A.M., the big article we all have been waiting for on Robert Sarver. The allegations against Sarver were racism, sexism, and sexual harassment.

The article will be coming out soon about Robert Sarver, the investigation, and all of his allegations. Stemming from ESPN’s large article looking at the 17-year tenure of Sarver; in short, to give a brief summary, Sarver created an environment where diversity and black people were treated wrongly and created an abusive environment for women. Some contemplated suicide, saw therapy, and were having harmful effects effecting their sleeping hours. That is just some of the stuff in that article that made the Suns and Robert Sarver such shameful people and inside the organization.

That entire article, by us, will come out recapping ESPN and expanding upon that with notes we took and where light can be shedded on and where everything can be summarized.

The toxicity of this poorly ran organization: INSIDE EDITION

CourtSideHeat reached out to a man that was a former employee of the Phoenix Suns, his name is David Bodzin. Mr. Bodzin worked 14 months for the team, the 2013-14 season, as he experienced first hand how toxic the organization got. Within the next few paragraphs you will be reading what Bodzin saw with his own eyes and actually experienced.

When asked about how toxic was the Phoenix Suns organization and if it matched up to the ESPN article, this was his response:

“The article I read matches up and expands on what I experienced in my 13-14 months in the Phoenix Suns organization. There are absolute accuracies in the remarks of employees simply not feeling comfortable approaching HR with issues in fear of retaliation. One of the main reasons I never came forward off the bat with my experience was that I was confident the Suns would blacklist me and keep me from my dream job (at the time anyway) that I had just accepted. The culture was one of fear, at best, and toxicity at average. It simply wasn’t an enjoyable experience, from the top down, despite what was an extremely fun season for the Suns (most wins for a team not to make the playoffs at the time, if I’m not mistaken).”

“One of the main reasons I never came forward off the bat with my experience was that I was confident the Suns would blacklist me and keep me from my dream job (at the time anyway) that I had just accepted.“

This quote alone is something very concerning to anyone reading this article or the article produced by Baxter Holmes of ESPN; not only was HR a no-go, but now David Bodzin could have been blacklisted if he spoke up. Imagine how crazy that actually is and sounds.

“The culture was one of fear, at best, and toxicity at average. It simply wasn’t an enjoyable experience, from the top down, despite what was an extremely fun season for the Suns (most wins for a team not to make the playoffs at the time, if I’m not mistaken).”

The former employee of the Phoenix Suns has nothing to lose as even in the most enjoyable moments of the season it was struck by fear and toxicity feelings and potentially actions. Many anonymous people that spoke out did list out how toxic it was and how nerve-wracking their time with the franchise was; now, we have a credible, on-record name to back these claims up.

As this first question/answer right here already backs up majority of the toxic, fear-based, negative allegations against the organization and several members (under the supervision of Sarver) that caused such allegations to arise.

When asked on who we should mainly believe when assessing the claims and article that came out, this is what he said:

“To that point, when asked if I’d believe the stories or Sarver, logic and experiences tell me that the majority, if not all of the stories in the article ring with truth. Earl Watson has absolutely no reason to put his name out there after ending up with the Raptors and lie about his experiences. To that point, I remain in touch with several of the “anonymous sources” with whom I’ve spoken in the past on their experiences. To a T, the experiences are echoed in this article, which tell me that they are not fabricated and it’s a sign of a deeper cultural issue that we sit here and question whether the billionaire owner is the victim and not those who have been seeking therapy for years to deal with the actual harassment they experienced in their time with the Phoenix Suns.”

A few things that you guys should have picked up on would be this:

Here is what David Bodzin has to say about Sarver/s apologies and why he is coming out with his experiences too:

“The main reason I spoke out is because I can without too much backlash. I won’t be called a liar and, while people have laughed at my story, and fairly so, there’s no longer a question as to whether it happened or not. It happened, without question. This was my experience, it was corroborated by several other people and Sarver “apologized” for it. Notice how he apologized for the one story told by the person who came forward by name but not to the 50-70 other anonymous sources whom, for one reason or another, did not feel comfortable giving their name. That, to me, is spineless, and while the term “innocent until proven guilty” always rings true, our eyes need to be open right now because where there is smoke, there is fire, and based on my experiences, this is not a smear campaign, it’s simply a situation in which people finally have someone willing to listen to their experiences and report on them.”

This is true, could he try to avoid the ones that are unknown? Potentially, but the thing is that he should at least apologize or do something that has created a toxic environment or things that would set off the toxicity. However, I can not say anything currently until more information comes out or the investigation concludes.

But David Bodzin is right as when things were being put onto record it was time to say sorry, until people start going off the record and he may not feel pressured to say something. That is my opinion, however, I, like the rest of the public, need to wait for official documents and statements coming from this investigation and the parties involved.

Real quick, here is some background to the experience he had mentioned:

“One of my last days we did the ALS Ice Bucket Challenge – no players, no coaches. [Robert] Sarver comes up behind me and pulls my pants down in front of the entire organization.”

Conclusion of “TOXIC ENVIRONMENT: Insider tells all that experienced the Sarver-Drama!”

These were amazing answers to the questions that we, CourtSideHeat, were able to ask Mr. Bodzin to get better knowledge of the situation at hand and just able to go deeper into the toxicity and fear that was created by Sarver and this organization.

We will be releasing more Robert Sarver articles to continue to talk about what is exactly happening within this organization and different things like that. Plus, we will be announcing through social media soon (if this is possible) a podcast episode featuring David Bodzin as we will be going over Robert Sarver, Phoenix Suns, and really trying to get a deeper understanding of what the heck is exactly happening. All right here on CourtSideHeat.

What!?! Structural damage to Jokic’s knee
What to know about Robert Sarver amid the allegations against him