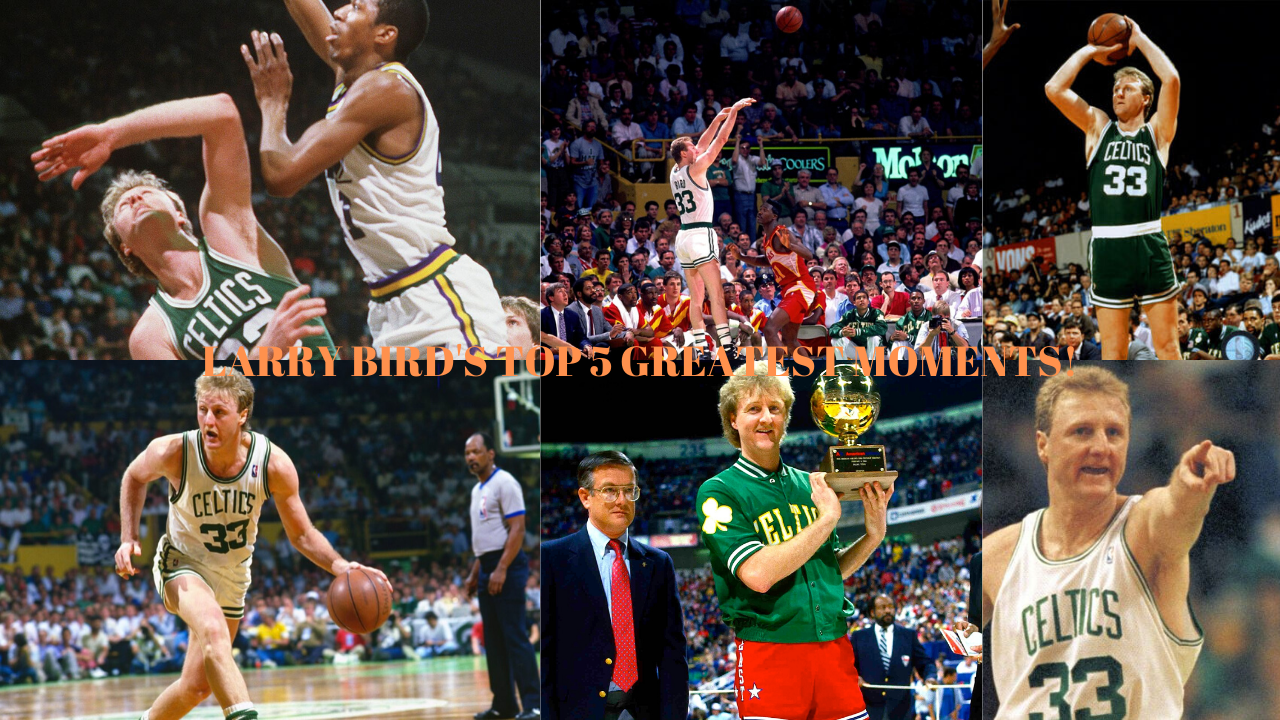 These are Larry Bird’s top 5 moments in his career! These top five moments are the ones you do not want to miss!

We have to remember that, at the time, those were the best shooters. Those shooters just got trash-talked on by Bird. We all know who came in first, Bird, of course. The player who came in second was Craig Hodges.

Larry Bird’s middle name should have been called “in-human,” why? Simply because this man doesn’t feel pain nor tiredness. Unless he does a great job of not showing it.

Back in 1985, was a special, unique time. In the 1985 NBA Finals, it was game 5 between the Lakers and Celtics. Series was tied 2-2, this was the deciding game. It appeared everyone was ready, besides the air condition.

The AC was working, so the players had to go without air condition. This would make it harder for a player to play unless your Larry Bird. Bird wasn’t being fazed by this.

The man scored an impressive 34 points, and 17 rebounds to go along with that. Bird got a double-double in the final game of the Finals, with no AC, to win it for his team. Final score? The Celtics won against the Lakers 121-103.

What makes this even more incredible, is the fact that this was Bird’s second ring and was the first of three Final MVP Awards he earned.

Who knew Larry bird could have feelings! Larry Bird was beating the Jazz so bad by 30 points. It was so bad, he almost achieved a quadruple-double. All he needed was one more steal, but what’s the response we get? We get this:

But, to be honest, I think the Jazz were happy that Bird decided not to cream them anymore.

Larry Bird….. the man was probably bored. Coming in at number two is something special. How? Well, for starters Bird was shooting the ball left-handed. He is a right-handed basketball player but decided to play lefty.

And you know what? It worked. Only Bird can post up a 47 point night, known as the Left-Handed Game, against the Trail Blazers. To back up how great of a trash-talker he is, he told everyone (including the media) that he was going to play the next game left-handed.

He scored off of ten fields, while only attempting 21 shots. That is how good Bird is because this man can do anything. It doesn’t matter what hand he uses, he is STILL going to be effective on the court.

Only Larry Bird could do what he did back in the ’80s and ’90s. Truly remarkable.

The Celtics were able to beat the Rockets in six games. Bird was posting spectacular numbers like 22 points per game, 14 rebounds per game, and then topping it off with 6 assists per game.

Even though he wasn’t the Finals MVP, Cedric Maxwell won that award, Bird was everywhere you needed. As he was ready at all times, trying to make a play, hustling up and down the court, etc.

Imagine winning your first title, after all that hard work. Now that is a HUGE celebration.

Thank you for reading this article called, “Larry Bird’s top 5 moments in his career!”

Gasol-Lakers reunion?
Drummond looking to have a contract with Cavs!