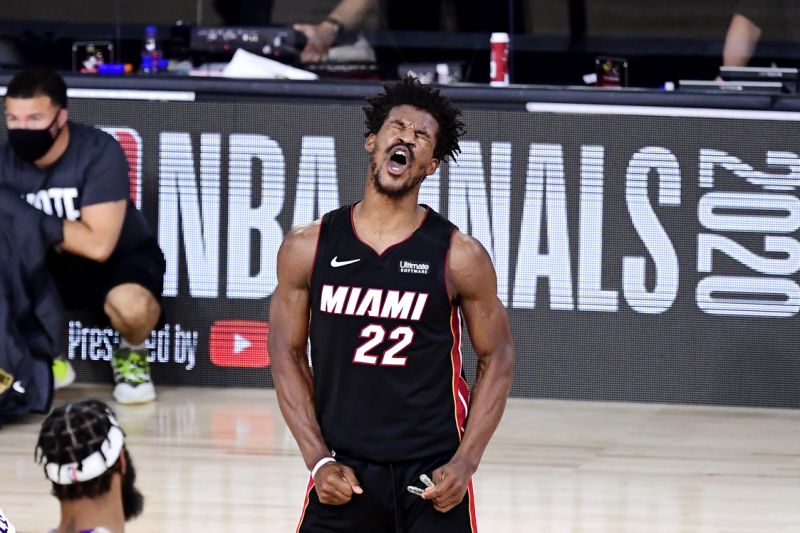 Jimmy Butler rallying his team to victory! The internet, fans, social media, everything is breaking loose as the Heat beat the Lakers for their first win this series. But it is more than the Heat, everyone is going crazy for one player. That player? Jimmy Bulter!

Butler earned the win, a triple-double, plus switching the momentum for the Heat’s benefits. On top of all of that, they didn’t have their two key players. Bam Adebayo and Goran Dragic, both out due to neck injuries (Adebayo) and plantar tears in the left foot (Dragic).

Jimmy Butler has been saying to the media, to the fans, pretty much to everyone that they aren’t going anywhere. That was proven true, the whole team pitched in for the Heat.

Here are the Heat’s stats for this game: what did they do right?

The Heat had to haul butt with Tyler Herro, Jimmy Butler, Kelly Olynyk, and other players they have. Jimmy Butler led both teams in points scored, which would be 40 points.

Herro and Olynyk both had 17 points each, then Duncan Robinson with 13 points. Overall, the Heat played very well. They shot 51.2% from the field, 35.2% from three-point territory, 91.3% from free-throws, and gathering 25 assists. All the categories I just listed the Heat beat the Lakers out in, this was just good ball in general.

The Heat capitalized on inside shots, they drove hard to the hoop, passing was money, and they played like the more physical team. They had to, Butler and the Heat recognized that, and they attacked that area.

They always kept the lead, never really was there a lead-change (like a big one) until the late fourth. Also kept the largest lead at 14 points, then they finished with an 11 point lead. Even without Adebayo, the defense was cooking for Miami.

Miami outplayed them on defense because they fixed their rotation, they fixed their play. The team made sure they had the mindset and the teamwork skills of playing without their two main players. This led to better defense by far, they held Davis and LeBron to 40 points. So, just put that in terms to how much Butler got in that game. Plus, he didn’t even take a three-pointer in this game.

What does Heat’s HC have to say on this?

“This is what he wanted, this is what we wanted,” Spoelstra said. “It’s really hard to analyze or describe Jimmy until you actually feel him between the four lines. He’s a supreme, elite competitor and we needed it.”

What are the Laker’s stats? What did they do right?

First of all, congratulations to LeBron James. LeBron James is now second in all-time playoff assists in NBA History, he has now passed Stockton and is now only behind Magic.

The Lakers top scorers of tonight was LeBron at 25, Morris and Kuzma at 19, lastly was Davis for 15 points. Those were the top scorers as the team combined for 43% shooting from the field, 33.3% from three-point territory, 75.9% from free-throws, and grabbing 43 rebounds.

The best thing the Lakers did was rebound hard, offensively was their territory. They just couldn’t capitalize on shot-making, plus their free-throws were ugly. Even though they missed seven, seven was just enough to hurt them.

LeBron was trying to pull everyone’s weight as he was the highest scorer out of the Lakers. The Lakers had their moments, the fast-break points were theirs. It had to be, LeBron and Davis were overpowering at some points in the game.

Final thoughts on this game:

My final thoughts on the game were this, that this game was a Heat’s game. This was a do-or-die game for the Heat, because if they would have lost this game then it would have been over. Because once the Lakers/LeBron is up 3-0 then it is over, the Lakers won’t choke that anyway (well… you never know).

To me, this was a Jimmy Butler’s game. He should why this is his team, why he is the leader, why people love and respect him on the court. This is just amazing teamwork, effort, and the absolute mentally of not getting to a 3-0 deficient.

The Heat had the advantage, they never lost it, even with the Lakers trying to make a comeback the momentum was on the Heat’s side. What do you guys think of this game? Do you think the Lakers should have won? Is Jimmy Butler your new player to have for a comeback? Sound off in the comments below!

Watch our last podcast episode to see what has been going around the league, getting caught up, and what you may have missed. Trust me, you don’t want to miss out on this podcast. Everything you need to know, and more, within 40 minutes! https://soundcloud.com/court-side-heat/head-coach-talk-nba-final-preview-whats-wrong-with-the-nuggets-and-more-ep7

Find out more about Bam Adebayo, Lakers, Heat, and Goran Dragic by clicking here. This is what happened, why they were out, and more! Click here for the article: https://courtsideheat.com/adebayo-and-dragic-again-listed-as-doubtful-for-tomorrow/

Desmond Bane getting interest from the Suns?
Bam Adebayo is now listed as questionable for Game 4!